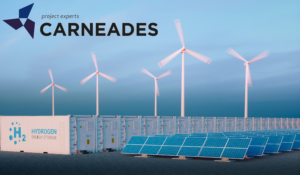 The interest in hydrogen and its potential in general for the energy policy and in detail for dedicated business cases is enormous, although hydrogen is not a new topic and has been researched for decades. While only a few participants were represented at previous trade fairs or workshops, there seems to be a cross-sector interest by now. For instance, at the International Hydrogen Symposium in Hamburg in October 2019, 730 actual participants came close to three times as many as expected.

While the focus in the past was on mobility and refilling stations, we are observing nowadays a great interest in our market of renewable energy and maritime industries in developing and enabling hydrogen projects. Our market is looking for attractive business models.

For example, the announcement alone to build one of the world’s largest hydrogen electrolysis plants with a capacity of 100 megawatts in the Port of Hamburg has stimulated the market. Hydrogen customers could be steel or aluminum producers, for example and negotiations with investors and customers are progressing.

Whereas in Schleswig-Holstein, the cross-industry partnership “Westküste 100” wants to produce CO2-neutral hydrogen from offshore wind energy and use the resulting industrial waste heat. The hydrogen will then be used for fuel production for aircrafts and fed into the gas networks.

The first projects are also initiated in order to find the best grid location and marketing conditions. The complexity lies in the fact that:

Current CO2-neutral projects are strongly state supported and/or their business models rely on subsidization. Referring to the second bullet point, the “eFarm” project of the GP JOULE Group is being subsidized by the Federal Ministry of Transport and Digitalization with a total of 8 million EUR. The goal is to create a hydrogen infrastructure from production to fleet utilization. The project is located in the region between Niebüll and Husum. However, relying only on state support or subsidization may be adequate in the hydrogen ramp-up phase, but it is also important to identify the demand for CO2-neutral services or products and to develop tailored solutions based on a specific demand. For example, is there a demand/market for CO2-neutral vehicles or flight tickets?

For northern Germany, there are two main not inconsiderable locational advantages. First, there is the low-cost on- and offshore energy production without any fossil price risks. Secondly, if hydrogen is produced close at the location of electricity generation, the grid will be less utilized whereby grid expansion of the north-south power line is stagnating at the moment.

The five North German coastal federal states Bremen, Hamburg, Mecklenburg-Vorpommern, Lower Saxony and Schleswig Holstein may have recognized their advantage and worked out a North German Hydrogen Strategy (“Norddeutsche Wasserstoffstrategie”). The strategy envisions at least 500 megawatts of electrolysis capacity in northern Germany by 2025 and five gigawatts by 2030. With their local strategy, the five states position themselves clearly and expect to influence the national strategy as well. A national hydrogen strategy is awaited to be published by the end of this year by federal government.

The market is on the move. Northern Germany is pushing its way to the top.